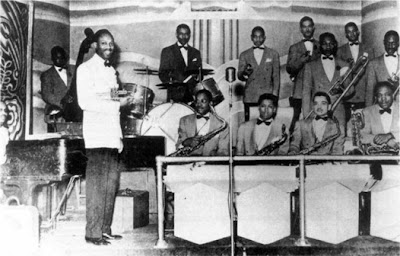 Like Mance Lipscomb, Milt Larkin was the son of a Brazos bottom fiddler. By the age of ten he knew that he wanted to be a musician. Born in Navasota in 1910, Milton "Tippy" Larkin was relocated to Houston as a youth and ultimately became a big band legend. A trumpet prodigy, he switched to the trombone and built his own band in 1936 and toured Texas and the Midwest for six years. Unwilling to accept the inferior wages recording studios customarily offered black musicians, his bands rarely recorded. But whatever the name, his band was always considered the cat's meow, featuring a who's who of talent, including Tom Archia, Arnett Cobb and Eddie "Cleanhead" Vinson on sax.

Larkin enlisted during WWII, playing in military bands, and afterwards continued his reign. But Larkin remained fiercely independent. Performing under the name Milt Larkin and His All Stars, he formed his own record label called Copasetic, to record his own album Down Home Saturday Night.

While in his youth he refused to be insulted with wages beneath his talent, he spent his twilight years playing for free for schoolchildren and in nursing homes around Houston. He passed away in 1996.

For a run-down on all the music legends of the Navasota Valley, click on the LINKS below to Chapters 7, 8 & 9 in my book: The Light of Day: