Nat Dove: An International Legacy in Blues... and Education

There are just a handful of what we could call old time, first generation Texas blues men left in this country. They are passing from the scene too fast. And Nat Dove is not only one of them, he is from our area, and deserves great attention and veneration.

Nat is not your garden variety old blues guy, sitting on an urban bench strumming an old beat up guitar for donations. He is not your garden variety anything. His career is the product of a lifetime of passionate, diligent pursuit of excellence. A man with this kind of character and talent could have been anything, but thank goodness Nat chose music, and not just any kind of music, but Texas blues. That makes Nat the very embodiment of everything I have been studying and portraying in my blues museum at Blues Alley. So you will not be surprised when I confide that he has been a great source of information and inspiration. So enough wallowing and waxing in my own syrup… 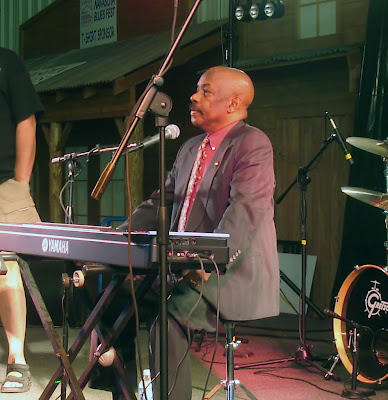 Nat Dove was born in Mumford, Texas in 1939. Mumford is just a nondescript village a few miles west of Bryan, Texas where he attended High School. Nat grew up literally engulfed in the Texas cotton industry, surrounded by cotton farms as far as the eye could see. The only thing that broke the Brazos bottom monotony was the lethargic dipping of a few pump jacks here and there. Church was the center of his lifestyle, and going to church every Sunday and making music was a part of the family tradition.

Nat hit the piano when just four years old, and never let go. Music became his window out of Mumford, his stairway to the sky, and he played and prospered in this dusty dirt road microcosm. Soon he began to hear a different tune. Something irresistible. Something that made his spirit and his body move. Something that was about to set the whole music world on fire.

Before there was rock n’ roll, there was blues and one of its many offspring, Texas boogie. On Sunday afternoons, when he and his sisters were only allowed to play Gospel music, Nat began to play his new found melodies. To avoid opposition, he slowed them down and played them Oh so reverently. Suddenly everybody was interested in what was going on around the piano. I’m sure his mother tried to wrap her mind around what she was hearing… I can imagine her shaking her head in the kitchen thinking, “I don’t remember that one!” And Nat would never forget those days, or the nurturing environment he enjoyed in those formative years. No matter what he did, he was taught to give it his all, to be the best. I have no doubt he is the product of a superior upbringing, where excellence was the cornerstone.

Like all young men, Nat jumped some fences so to speak, and began to seek the sources of his newfound music. The Brazos bottom was teaming with blues and blues men and blues venues. Juke joints; River bottom dives where the mostly non-churchgoing types hung out. These were smoky, dangerous places where whores skulked around and cotton pickers and mule drivers gambled, drank and occasionally cut each other up. And in the peaceful moments, barrelhouse piano players like Buster Pickens of Hempstead hammered away on the battle-scarred and stained ivories with abandon. These people worked hard and played hard and they liked their music hard. Their music was as edgy as the hoes and shovels and discs and axes they used to work the earth. But blues had morphed from the wailing wagonloads of moans of the early nineteen hundreds into a hopped-up eight-cylinder engine lubricated by fermented corn juice. It was a dark, seductive, invigorating world, and musicians were kings.

Nat was soon playing with Brazos Valley music royalty, and making a niche for himself. It was the Fifties, and boogie was taking over the sound in the bottoms, and inspiring another blues child: Rock n’ roll. Black artists like Juke Boy Bonner, Lightnin’ Hopkins, Pee Wee Crayton and T-Bone Walker were making electric guitar and Texas boogie popular. Nat found a niche by playing the piano in this new upbeat style, and found a legacy in the process. Visits to his uncle’s recording studio in Houston clinched his future, where he met Big Mama Thornton and sat in as a drummer and watched other upcoming blues and boogie artists cut records and launch their careers. Rock music was about to change music forever, and there was a race to keep up with the music. There was just one thing to do. Like many other Texas bluesmen, Nat succumbed to the overwhelming magnet of California.

By the sixties, Nat was established in California, with an all–star boogie band. It seems incredible now, truly historic, but at the time Nat was just following his passion. But there he was in Hollywood, playing piano with Pee Wee Crayton’s lead guitar, Mickey Champion’s vocals, and Big Jim Wynn’s sax. Soon Nat was an often requested West Coast studio pianist. That led to tours, contracts and soundtracks, and a resume that reads like the Who’s Who of West Coast blues. Nat has played and recorded with Big Mama Thornton, Little Johnny Taylor, Sam Cooke, Robert Cray and Lowell Fulsom, just to name names, and many others.

By the seventies, Nat was travelling the world, doing concerts in Europe and Japan and sharing his love for Texas boogie with audiences far removed from those dirt roads in Mumford. So well was he received in Paris that he just adopted the place and stayed for a decade, becoming the Composer in Residence at the American Culture Center in Paris. If rejection is hell, then acceptance is an earthly taste of heaven and Nat has certainly had his taste of that. Sadly, he has found more of it in far-away places than his own native backyard.

The rest is a long history you can read about on his website, natdove.com. If you go to the Press & Reviews page, it is led off with my glowing account of one of his appearances here in Navasota. I meant every word. I am very proud to know him and help put a shine on his inspiring story.

But Nat is back home in the States now, having settled in Oakland California, and spends his time nurturing what his parents instilled in him; education, writing, performing and teaching young people an appreciation for music and excellence. And in the process living and inspiring a commitment to give back as much, or more, in life than you received. After all is said and done, Nat Dove learned his Sunday School lessons well.

It's Saturday around noon, and as I posted the final draft of this blog, the music box in Blues Alley offered up Nat's version of "Don't Mess With Texas." Nat may live in California, but his voice will always be alive in Navasota, the Blues Capital of Texas!

Note: Nat is the second bluesman I have written about who had an important relationship with Pee Wee Crayton of Rockdale, who made a name for himself out in California... the other being Dub Mcleod. I guess I had better write about him next! There is always one more blog to write...
Posted by Russell Cushman at 8:53 PM