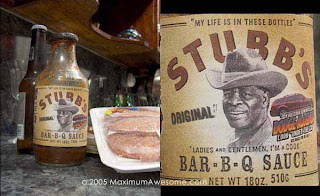 If anyone visits the capital of Texas, and asks for excellent, authentic Texas barbeque and Live Texas Music, they are likely to be sent to one place. Stubb’s BBQ. That is because Christopher B. Stubblefield spent his life perfecting the art of Texas barbeque, and with the help of partners, brought it to Austin in 1986, where they began to market his west Texas style barbeque and world renowned barbeque sauce. “Stubbs” loved people, music and cooking meat, and he brought all of these together in his special way, making his name and his barbeque famous from Lubbock to Austin.

His first restaurant was in Lubbock, started after his return from the Korean War, where he was wounded twice. He looked for something to do besides pick cotton, something he had done ever since he was a little boy in the Brazos River bottom near Navasota, where he was born in 1931. Two things emerged in his new enterprise, both remnants from his childhood; Barbeque and Blues. As his barbeque filled bellies, singers like Muddy Waters, or Johnny Cash or Emmy Lou Harris filled the ears of his customers. Some musicians would play for tips, just to say they had played there. Nobody seemed to mind when he would take the mic and sing one himself. But he never quit his day job. “I want to feed the world” he would say with a big Texas smile. It was a sad day in Lubbock when his historic place burned down.

Stubb used the change for the better, and moved his two loves to Austin, and used the same ingredients to satisfy the apatite of a whole new generation. Stubb’s was THE place for fresh barbeque and music. He passed away in 1995. Like all restaurateurs, he had his struggles, but his legacy of Texas entertainment still lives on. Every time you see his face on a bottle of sauce, remember he started his remarkable life in Navasota, and he loved people and listening to the blues and feeding people. A man could do a whole lot worse.
Posted by Russell Cushman at 5:14 PM